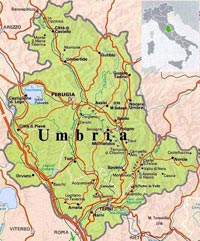 Planning a trip to Italy? Welcome to Tiber Valley Travel, the premiere site for information about travel in Umbria, Italy.
For a sampling of Italy’s finest, come along on a Day Tripper Tour. Join a Bicycle Trip on Umbria’s back roads or maybe you would prefer a Walking Expedition in Italy’s glorious countryside.
Don’t miss our take on Festivals in Umbria. Venture further a field in a virtual outing to some of Italy’s most favourite Destinations including Italy’s romantic Hill towns in Umbria.
Whether novice or expert in viticulture, an Italian Wine Tour is a great way to learn more about the fabulous Wines of Umbria, Italy . 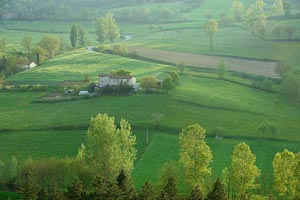 The home of St. Francis and the olive oil capital of Italy, Umbria is a landscape of sleepy valleys, solemn poplars and medieval towns perched atop hills. Green forests, grain fields in the plain, and vineyards on the slopes, fill in the land between. And the beauty of your surroundings is complimented by the warmth and hospitality of a region not yet trampled by tourists. 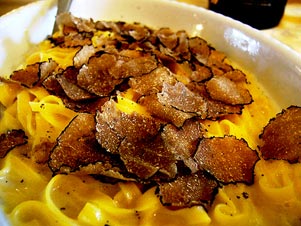 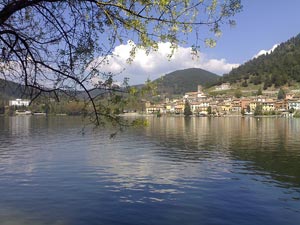 The towns are full of surprises: exuberant jumbles living in their old stones as if they were features of the landscape. Underground parking lots in the foundations of a 16th century fortress, a Roman aquaduct used as a cycle path, a guy who’s a hero for talking to birds…. Our route is articulated around three ancient and beautiful cities set in lovely landscapes. 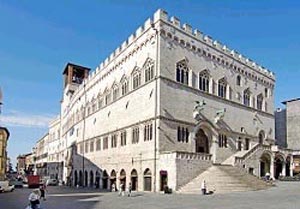 Sitting atop an irregular hillside, is the region’s largest city of art. Most of its treasures are enclosed in the historical nucleus, delineated by the Etruscan walls. Piazza IV Novembre is the fulcrum: in its centre lies the beautiful Fontana Maggiore, symbol of Perugia, and around it stand the Gothic cathedral and the magnifi cent Palazzo dei Priori, which houses the Collegio del Cambio, with frescoes by Perugino, and the National Gallery of Umbria, chock full of masterpieces (sculptures by Arnolfo di Cambio and paintings by Piero della Francesca, Duccio di Buonisegna, Fra Angelico, Pinturicchio, and more). 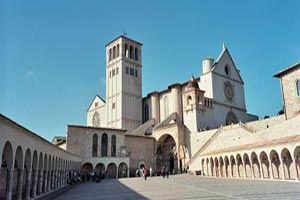 Held tightly within its walls, Assisi is a magical place, and the fact that practically nothing has changed since the Middle Ages has kept its enchantment intact. One cannot help but admire the Basilica of San Francesco, one of the most famous sites of Christianity. It is composed of two churches one above the other: the lower church, which holds the tomb of the saint, is decorated with frescoes by Simone Martini, Cimabue, and Lorenzetti; the upper church features frescoes by Cimabue and in particular a cycle on the life of St. Francis, comprising twenty-eight paintings by Giotto or artists supervised by him. From the Basilica, Via al Santo leads to Piazza del Comune, which holds Palazzo dei Priori and the Temple of Minerva. Other important sites include the Basilica of Santa Chiara, the Cathedral of San Rufino, and the Rocca Maggiore 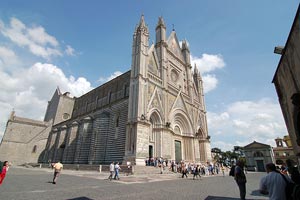 Isolated at the top of a tufa cliff, Orvieto emanates a unique fascination and captivating beauty for the millions of tourists who visit the city each year.
Its fame is mainly tied to the Duomo, one of the absolute masterpieces of Italian Gothic architecture. The façade with rose window and relief sculptures by Lorenzo Maitani are magnificent, and Luca Signorelli’s fresco cycle The Last Judgement in the Cappella di San Brizio is unforgettable. The most important public buildings include Palazzo del Popolo, returned to its original splendour by a painstaking restoration. Also of particular interest is the Pozzo di San Patrizio.
GUBBIO – TODI:

Visiting Gubbio is like stepping back in time. Noble and imposing, the city is situated at various heights on the slope of Monte Ingino, and is criss- Ponte delle Torri (230 m long and 76 m high) is breathtaking. Todi emerges on a hilltop right out of the 13th century; it is the birthplace of Jacopone, the mystic poet of the Laudi. Piazza del Popolo is one of the most unique squares in all of Umbria. 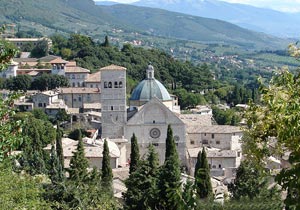 Città di Castello features the majestic Palazzo Vitelli; the pride of Foligno is Palazzo Trinci, with frescoes by Gentile da Fabriano. Spello, wedged onto a spur of Monte Subasio, is full of Roman vestiges; the Cappella dei Baglioni in the Church of Santa Maria Maggiore has frescoes by Pinturicchio.Then there is Narni, with its Duomo and Palazzo del Podestà; ancient Trevi perched on a hilltop; Montefalco with crossed by stairways and marvellous medieval streets.
Palazzo Pretorio and the lovely Palazzo dei Consoli face Piazza Grande; climbing to the highest part of the city, you reach the Gothic Duomo and Palazzo Ducale, a fine example of Renaissance elegance. Spoleto is a dense agglomerate of grey stone set into the green surroundings. Its austere mass conceals charming views and numerous architectural treasures.
In addition to the zone of the Roman Forum and certain notable churches, one of the most important sites is the Romanesque Duomo (13th c.), which sets off a lovely piazza. Its façade is truly a masterpiece. Outside the town centre, the colossal 14th-century the Museo Civico di San Francesco and frescoes by Benozzo Gozzoli; Bevagna with Piazza Silvestri, a wonderful slice of the Middle Ages.
But apart from the most well known cities, every town in Umbria holds wonderful surprises in store. Churches, palaces, museums, sculptures, bas-reliefs, frescoes, and paintings are all part of the history of Umbria. 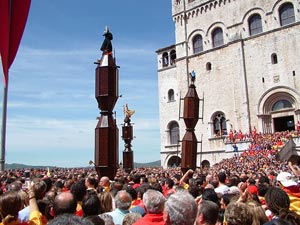 Umbria is Land and Nature: sweet and fascinating: from tempting naturalistic itineraries never crowded all to disover on foot, by bicycle or on horseback.
You can also let yourself be tempted by the emotions of flying free, climbing up rocky walls, join excursions in caves, descend in rafts, go sailing or canoeing in one of the lakes.

Umbria is History and Art: Ancient Cities, roman ruins, underground cities, museums and Basilicas….
The passion for art is also handed down in time by the workmanship of wise artisans who in their laboratories work with ceramics, wrought iron, copper, wood, leather, or lace and doily embroidery.

HOW TO REACH UMBRIA: